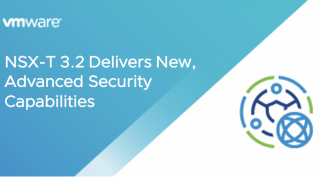 It’s an impactful release focused on significant NSX Security enhancements Putting a hard shell around a soft core is not a recipe for success in security, but somehow legacy security architectures for application protection have often looked exactly like that: a hard perimeter firewall layer for an application infrastructure that was fundamentally not built with security as a primary concern. VMware NSX Distributed Firewall pioneered the micro-segmentation concept for granular access…Read More