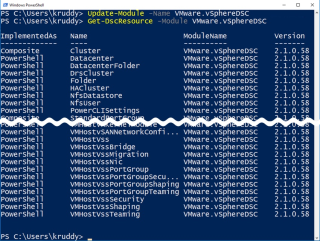 There has been a flurry of activity on a particular GitHub repository over the past couple months and we are now extremely excited to be releasing version 2.1 of the Desired State Configuration (DSC) Resources for VMware. While it might be minor in version number, it is major in terms of features and functionality. This The post New Release – DSC Resources for VMware 2.1 appeared first on VMware PowerCLI Blog.