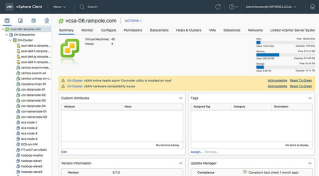 Advertise here with BSA As most of you have seen, vSAN 6.7 just released together with vSphere 6.7. As such I figured it was time to write a “what’s new” article. There are a whole bunch of cool enhancements and new features, so let’s create a list of the new features first, and then look at them individually in […] The post What’s new vSAN 6.7 appeared first on Yellow Bricks .