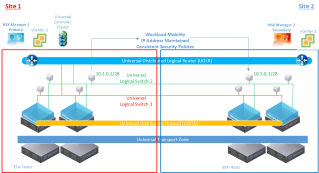 Back on February 2nd, VMware announced two new products, VMware NSX for vSphere 6.3 and VMware NSX-T 1.1, and the adoption rate has reached new heights for VMware, as Chief Executive Pat Gelsinger mentioned in the Q4 2016 earnings that NSX is on track to bring in $1 Billion in revenue this year. That is impressive especially if you take into account the initial slow adoption rate of NSX.