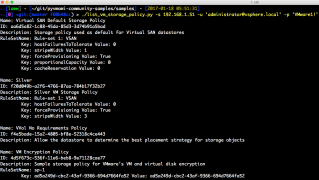 I have been spending quite a bit of time lately with PowerCLI Core, especially with one of my pet projects. One of the limitations that PowerCLI Core has today is that the Storage cmdlets which includes vSAN and VVol functionality has not been ported over yet. This means that if you need to do something with VM Storage Policies for example, it would not be possible with PowerCLI Core and you would have to use the Windows PowerCLI version instead.