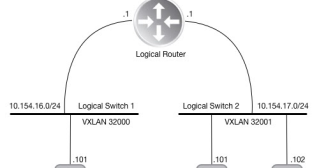 Ok, yesterday I posted Restoring NSX from Old Backup – Impact on Distributed Network where restore. 5 sigma is probably not as good as 6 sigma (whatever that is) so this post is with its Control VM. That’s right, his diagram is the same diagram from yesterday, with no Control VM. That’s because the logical diagram depicts the Data Plane, not the Control Plane (gotcha). However, the Control VM does have a connection for its HA interface (formerly known as Management Interface), which I dropped…Read More