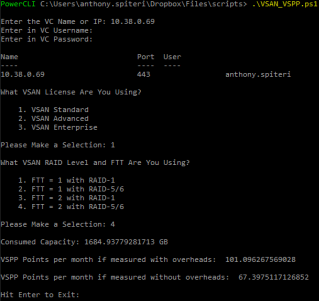 There is no doubt that new pricing introduced to vCAN Service Providers announced just after VSAN 6.2 was released meant that Service Providers looking at VSAN for their IaaS or MSP offerings that had previously written it off due to price, could once again consider it as a viable and price competitive option. As of writing this blog post there is no way to meter the new reporting mechanism automatically through the existing vCloud Usage Meter with the current 3.5 beta also lacking the ability to report billing info.