How to automate vSphere MOB operations using PowerShell? via virtuallyGhetto 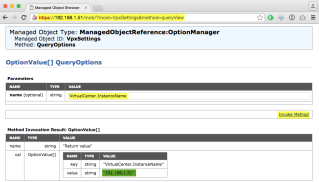 A couple of weeks back I was investigating something that involved the use of the vSphere Managed Object Browser (MOB) and I needed to automate a particular operation. For those of you not familiar with the vSphere MOB, it is a UI debugging tool that allows you to visualize and invoke vSphere APIs using just a web browser. The vSphere MOB is available […]