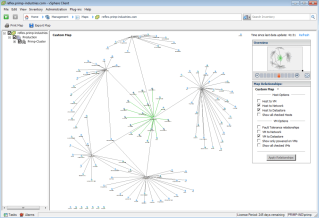 A really useful capability that vCenter Server used to provide was a feature called vCenter Maps. I say “used to” because this feature was only available when using the vSphere C# Client and was not available in the vSphere Web Client. vCenter Maps provided a visual representation of your vCenter Server inventory along with the different relationships between your Virtual Machines, Hosts, Networks and Datastores. There were a variety of use cases for this feature but it was especially useful when it came to troubleshooting storage or networking connectivity. An administrator could quickly identify if they had an ESXi host that was not connected to the right datastore for example with just a few clicks.