Recovering from a full #VSAN datastore scenario (via cormachogan.com) 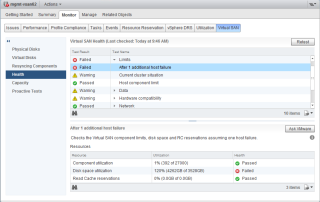 We had an interesting event happen on one of our lab servers this weekend. One of the hosts in our four node cluster hit an issue, which meant that the storage on that host was no longer available to the VSAN datastore. Since VSAN auto-heals, it attempted to re-protect as many VMs as possible. However, since we chose to ignore one of the health check warnings to do with limits, we ended up with a full VSAN datastore.