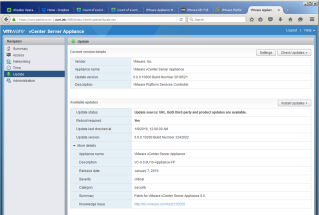 The vSphere team releasedUpdate 1b a few days ago. TheBuild no is 3343019. As usual, it’s wise to review the Release Notes before making changes to live environment. You need to review both the vCenter release notes and ESXi release notes. If you are already on Update 1, and you are using the vCenter appliance, […] The post VMware vCenter Server 6.0 Update 1b appeared first on virtual red dot.